Reasoning, creativity, and spatial thinking are all nurtured by mathematics, making its absence inconceivable. Humans have had the innate ability to use and analyse numbers since the dawn of civilisation, but this ability is surprisingly shared with a fascinating number of other organisms. Our intuition about numbers is rooted within our biology and aids the exploitation of food sources and the evasion of. In fact, the ability to comprehend numbers is of significant evolutionary benefit and is thus present within many populations.

The capacity to analyse quantitative information has been present in one of the earliest lifeforms: unicellular bacteria. Bacteria, capable of dividing at rapid rates, can detect both an influx (or presence) and efflux (or absence) in their numbers. Vibrio fischeri, a gram-negative marine bacterium, illustrates this phenomenon to ensure sufficient cells are present to induce an effective response, i.e. the release of a toxin to damage a host cell (Clark, 2013). They are a bioluminescent variant that is capable of detecting the presence of one another via a phenomenon known as quorum sensing: the expression of genes at a critical threshold concentration.

A specific lipid signal molecule known as an autoinducer is continuously produced and reaches a high concentration at the respective population density. As the autoinducer can diffuse freely bidirectionally, it can bind to activators within the bacterium to induce transcription. Vibrio fischeri specifically exploit the autoinducer acyl-homoserine lactones (AHL), which binds to the LuxR transcriptional activator protein. The complex created then binds to the lux regulatory site with high affinity upstream of the lux operon. The instigates the expression of lux genes, including luxA and luxB, responsible for the production of the luciferase enzyme and LuxI, which catalyses the synthesis of AHL. The luciferase enzyme is responsible for the emission of light. Therefore, since luxR also controls the expression of the synthase that makes the AHL it would in return produce more AHL, thus creating the autoinduction phenomenon (Brock and Madigan, 2009). 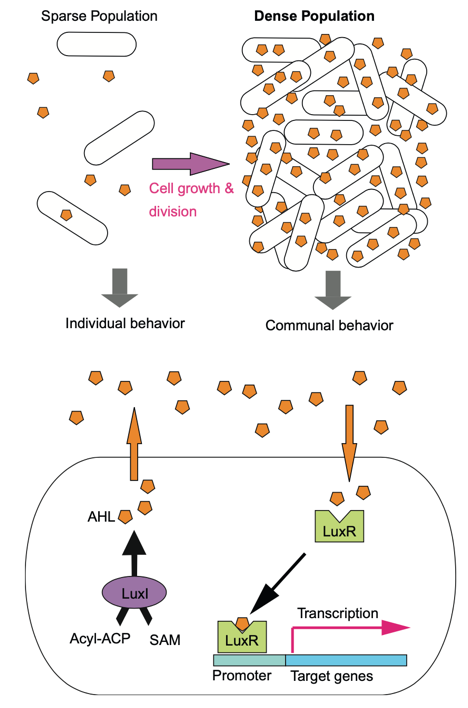 Figure 1: A visual summary of the autoinduction process in which a high cell density causes the increased release of bioluminescent autoinducer, more of which is produced in a positive feedback mechanism (Clark, 2013)

Viruses of gram-positive bacteria have been discovered to quantify numbers to communicate. Instead of AHL, short peptides (which require specific channels or receptors to pass through the cell surface due to their hydrophilicity) are used as autoinducers to track viral population density. When the concentration threshold is reached, the virus is prompted to incorporate its genome in the bacterial host through lysogenesis, effectively infecting the host (Clark, 2013). Quorum sensing is not limited to the presence of an autoinducer and has been observed in animals as well. Myrmecia nipponica, Japanese ants, move their colony when a threshold population has accumulated and it is deemed safe to move to a new location (Cronin, 2012).

Animals are equally capable of numerical cognition in decision-making circumstances. Field mice predate ants and have a remarkable mechanism in which they are capable of interpreting their numbers to prevent injury during the attack. Mice that could choose between five versus 15, five versus 30, and 10 versus 30 ants always preferred the smaller quantity of ants. It seems the mice chose a smaller group to ensure less retaliation and increased safety (Ullter at al., 2003). Similarly, numerical cues are crucial within the context of hunting, as was observed with wolves hunting on elk and bison. Such prey is capable of causing significant damage to the wolves and therefore an incentive to “hold back” and let others go in for the kill, particularly in larger hunting parties, is present. As a consequence, wolves incline to hunt in optimal group sizes: 2 to 6 wolves are required to hunt an elk whereas 9 to 13 are typical to succeed in hunting a bison (MacNulty et al., 2014). Therefore, in the context of hunting, there is a clear preference for “strength in numbers”, suggesting quantitative assessments are essential for survival within such predatory populations.

The last example of mathematics utilised by animals was observed by a 2005 University of Washington study on black-capped chickadees (Templeton, Greene and Davis, 2005). These birds warn of potential predators via alarm calls to highlight the severity of a threat. The acoustic features (mainly intensity and repetition of the specific chirp) identify the size of a predator. An alarm instigated by the chickadees with two repetitions denotes a harmless threat, such as a great owl incapable of manoeuvring through the dense habitat of the black-capped chickadees. In contrast, the amount of repetitions increases with greater agility, speed and therefore threat of the predator. In this scenario, the number of repetitions serves as an active anti-predation strategy. The ability to cognitively recognise a threat and convert this into a warning system reliant on mathematics is what gives black-capped chickadees an evolutionary edge.

Quorum responses underline the necessity of quantification in consensus decision making among an array of species. Equally, an animal’s ability to access the number of individuals within its species relative to an opponent is crucial in its success of survival. Inconsistency in the level of understanding and utilisation of mathematics indisputably exists. However, irrespective of its evolutionary origin, one thing is certain: numerical competence is most certainly an adaptive and evolutionary beneficial trait.