A previously unknown mechanism of viral resistance in plant meristems has been elucidated by researchers at the University of Science and Technology of China in a new study published on October 8th, 2020.

The shoot apical meristem (SAM) is a collection of stem cells in the plant tip which provides specialised daughter cells to form new organs. Plants have the remarkable ability of keeping the meristem virus-free, even in the event of widespread infection of the rest of the plant. This has long been known and exploited in science and agriculture for the cultivation of plants from previously infected donors. In this technique, a cutting is taken from the SAM and grown on appropriate media into virus-free plantlets. For the first time, a stem cell regulator called WUSCHEL has been identified in the protection of the meristem from viral infection (Liu, 2020).

The WUSCHEL (WUS) gene encodes a transcription factor with many target genes. Classed as a homeodomain protein due to its broad reaching control over development, WUS is already known to control stem cell production and differentiation in the shoot tip of Arabidopsis. Expression of WUS protein is confined to a small region of the SAM called the central zone, but it can migrate to other areas after being synthesized (Jha, 2020).

In their study, Wu et al. primarily followed the infection of Arabidopsis with Cucumber Mosaic Virus (CMV). Three other viruses were also used to determine that WUS-mediated resistance is effective against several viruses; these were turnip crinkle virus (TCV), tobacco rattle virus (TRV), and turnip mosaic virus (TuMV). The distribution of CMV infection can be assessed via in situ hybridization, a deceptively difficult molecular biology technique in which specifically designed RNA probes are applied directly to a fixed tissue sample, where they will bind to target viral RNA. Detection of the probe involves antibodies and staining. As seen in Figure 1, viral infection does not enter the SAM (boxed in red). Further tests clarified that infection specifically remains below the WUS expression domain (Wu et al., 2020). 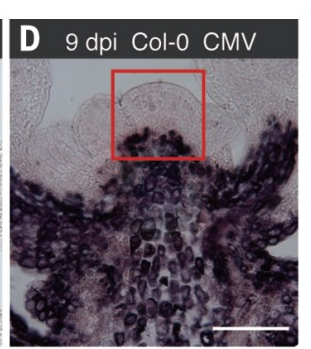 Expression and distribution of WUS protein responds to viral infection. Green Fluorescence Protein (GFP) was engineered onto WUS as a reporter protein to view such changes in WUS expression. As seen in Figure 2, the amount and distribution of WUS protein increased markedly 9 days post inoculation (dpi) with CMV. Furthermore, application of a compound called dexamethasone (DEX), which can induce WUS activity in certain engineered plants, demonstrated the importance of WUS in the antiviral capacity of the meristem. Without induction, 89% of the plants were infected by viruses; however, a remarkable 90% of the plants with DEX-induced WUS activity remained virus free.

Agrobacterium tumefaciens is a bacterium with naturally occurring mechanisms for inserting plasmid DNA into plant cells. This technique has been adopted into molecular biology as a delivery system for genetic engineering in plants, with adjustments like specifically engineered plasmids to improve efficiency (Van Montagu M. 1977). To determine how WUS works, WUS and GFP were co-infiltrated into nicotine plants using A. tumefaciens. Once again, DEX was used to activate WUS activity, triggering the translocation of WUS into the nucleus. Within the nucleus, WUS acts as a transcriptional repressor, resulting in the suppression of GFP (Wu et al., 2020).

Inhibition of viral proteins is perhaps unsurprising, but this investigation showed that WUS downregulates all protein synthesis in the cell. Via a broad range of molecular techniques, WUS was found to associate with methyltransferase promoters. Methyltransferases are responsible for methylation of ribosomal RNA, which stabilises rRNA processing and ribosome structure. Thus, WUS represses ribosome assembly at least in part by negatively regulating MTases, resulting in a global decrease in protein synthesis (Wu et al., 2020).

The results of this paper reveal a molecular basis for the broad-spectrum innate antiviral immunity of the plant shoot apical meristem. Expression of WUS in the leaves, rather than just the shoot tips, is shown to provide whole-plant immunity and the possible applications to agriculture against the devastation of plant viruses is promising.