The ethics crisis of 2018 surrounding the birth of two genetically edited twin girls, Lulu and Nana,  raised enormous medical practice concerns and sparked outcry from all across the globe. Aside from ethical concerns, the subject matter of gene editing on humans is so sensitive because the genetically modified twins were exposed to one of the risks of gene editing – “off-target effects”.

Although the scientific community has conducted thorough research and studies on the safety of CRISPR, the phantom of the potential risks still haunts us today – as one editing error could lead to devastating effects and bring irreversible harm to the human body.

In recent years, the range of gene-editing tools has been expanding exponentially, for instance, a team lead by David Liu from Harvard University has developed “base editing” (Rees and Liu, 2018), which allows for more precision and brings more possibilities into gene editing.

Unlike CRISPR, base editing avoids the cleavage of nucleic acid backbone and directly chemically modifies bases of the target nucleotides by genome and transcriptome editing (Porto et al., 2020). There are two main types of base editors, DNA and RNA base editors, which are widely adopted by the genome and transcriptome editing communities (Porto et al., 2020). DNA base editing technologies mainly involve cytosine base editor (CBE) and adenine base editor (ABE) mechanisms. The CBE mechanism involves the binding and opening of genomic DNA, deamination of the target cytosine, nicking of the top strand and DNA replication of repair to generate the final base-edited DNA as indicated in Figure 1.

Albeit bringing in more possibilities, new tools raise new concerns, how do we know if this is safe enough?

On the 7 th June, 2021, a team led by Chengqi Yi from Peking University published
their study, titled “Detect-seq reveals out-of-protospacer editing and target-strand editing by
cytosine base editors” and reported the off-target risks of CBE (Lei et al., 2021).
CBE employs the mechanism of converting dC in the base to dU and to dT in order to
convert cysteine to tyrosine in DNA. As dU is required, Yi et al. designed a method of using
uracil-DNA glycosylase (UDG) to recognise dU and edited bases as indicated by Figure 2.
Figure 2. 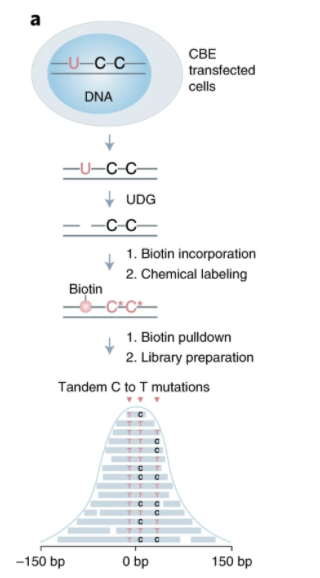 Yi et al. applied Detect-seq on several commonly edited base targets which have never been reported on off-target phenomena, such as VEGFA_site_2, HEK293_site_4 and EMX1, and successfully identified dozens to hundreds of putative sgRNA binding sites (pRBS) which all showed relatively strong Detect-seq signals. Then, researchers systematically performed Detect-seq for CBE architectures excluding sgRNA, APOBEC1 and UGI and found that the signals for these pRBS-containing loci either decreased to background level when sgRNAs or APOBEC1 were excluded, or responded to a varying degree to UGI deletion, showing that these pRBS-containing loci are common Cas9-dependent off-target sites. Moreover, the team further classified different off-target phenomena and discovered that off-target sites can be classified to Cas9-independent and Cas9-dependent.

To ensure the reliability of Detect-seq, the team then compared this approach with multiple existing methods which identify off-target sites.

When compared to Cas-OFFinder, which is widely used in silico prediction software for Cas9-induced double strand breaks (DSBs), approximately 30-50% of off-target sites reported by Detect-seq were also supported by Cas-OFFinder. It is therefore evident that Detect-seq is an excellent tool for identifying off-target sites of CBEs in terms of specificity and sensitivity.

It came as a surprise that Detect-seq signals were present outside pRBSs, which showed that off-target sites can occur outside pRBSs as well, even for sites several bases or more than a hundred bases away from pRBS, which demonstrated that CBE can edit bases outside the canonical editing window. CBE is dependent on Cas9 for editing and it requires the existence of protospacer adjacent motifs (PAMs). However, researchers discovered that CBE led to prevalent out-of-protospacer off-target edits even when CBE is only supposed to edit PAM-containing strand and not the sgRNA-pairing strand. This indicates that CBE can induce a lot of off-target edits and this challenges the knowledge that CBEs typically do not cause proximal off-target edits.

Researchers then studied the mechanism of out-of-protospacer and target-strand editing with Detect-seq data. As stronger signals were detected at the PAM distal side than the proximal side for both edits, this suggests that the secondary structure of DNA may play a role. With a ridge linear regression analysis, it was found that PAM distal side out-of-protospacer edits were strongly correlated with mismatch numbers in the first 5-8 bp of the pRBSs. Despite demonstrating the association with instability of the RNA/DNA hybrid, it is still insufficient to make predictions on out-of-protospacer and target-strand edits.

Lastly, Yi et al. assessed CBE tools such as BE4max-YE1and Cpf1(Cas12a)- BE systems. Although producing less off-target edits in comparison, BE4max-YE1 still has a lot of room for improvement. As for tools based on the application of Cas12a, there were more off-target mutations detected by Detect-seq. These investigations showed that Detect-seq is an effective tool for studying CBE off-target editing and also demonstrated that gene editing tools need further improvements.

The results of this study clearly disseminates high hopes researchers have for CBE. However, it is noteworthy that Detect-seq’s applicability goes beyond assessment of CBE, and can be used to assess technologies that have been recently developed like ACBE, GBE and mitochondrial base editors DdCBE. Therefore, Detect-seq could be widely used in specificity evaluation and tool development in the expanding field of genome editing.